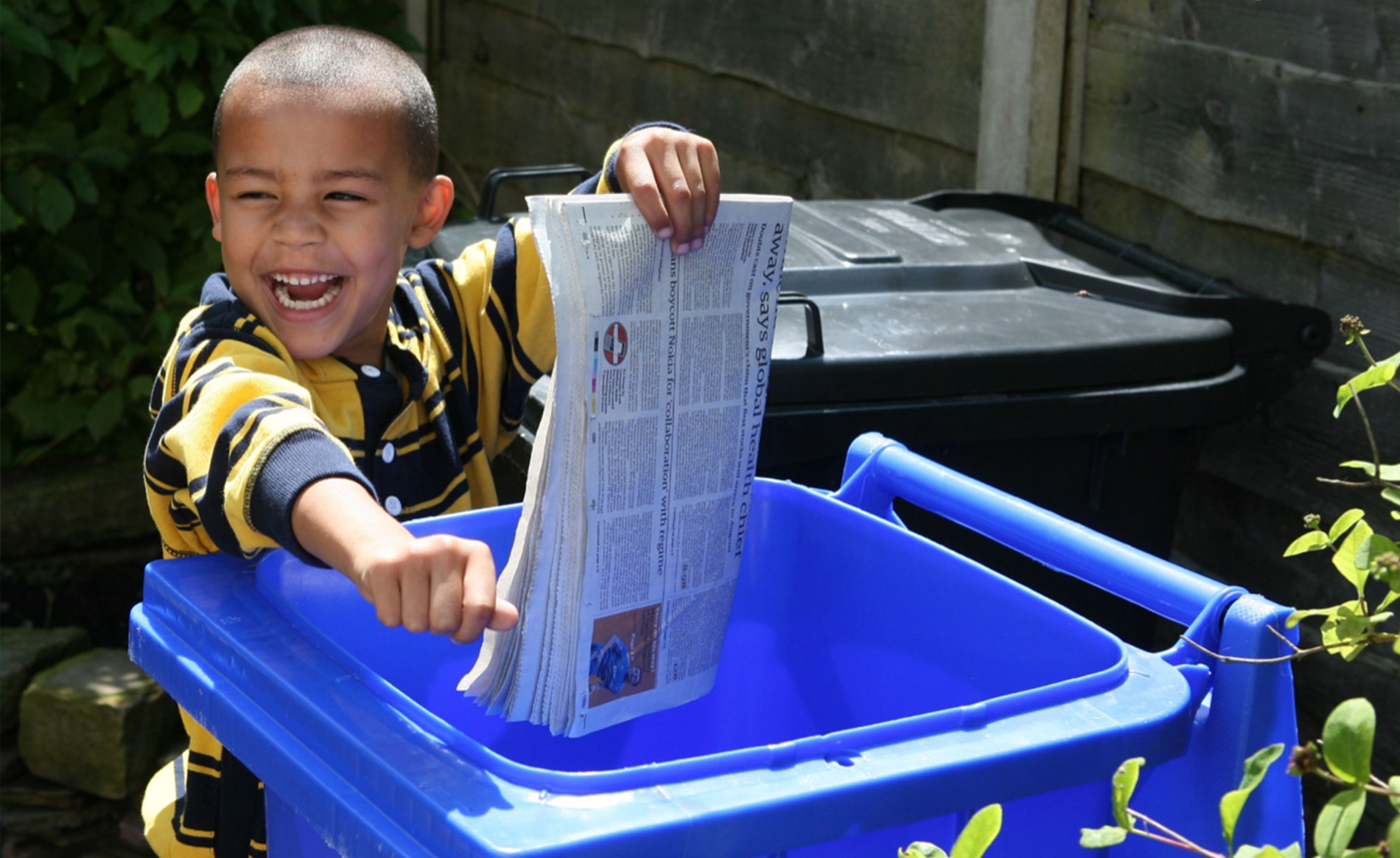 Supported by a grant from DCLG, Greenredeem was introduced to all residents in the Borough in March 2014.

As part of a wider strategy to increase recycling to 50% by 2018, Greenredeem was contracted by Ealing Council to motivate, educate and inspire its residents to recycle more. The challenges for the waste and recycling team in Ealing were similar to many of those faced by other London boroughs; declining recycling rates, a high proportion of flatted properties, multiple languages spoken amongst residents and a transient population. All these factors contributed to a recycling rate that in 2012/3 stood at 40.5%, having slid back from 40.8% in the previous year. 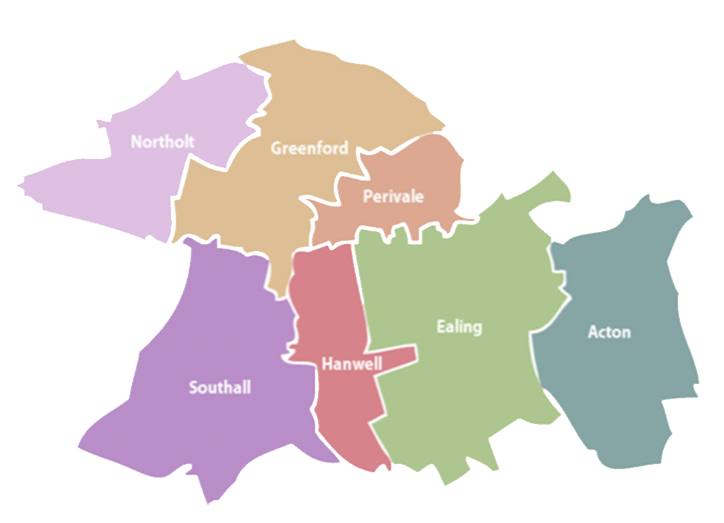 With 7 distinct towns in Ealing, it became apparent very early on that communicating on a local level would be very important in engaging residents. Being the 3rd largest London Borough by populace, and the 11th largest in size, the Borough represented a series of areas that would need to be approached with specific strategies.

Lessons learned by the Borough’s own recycling team, and using highly detailed demographic information, Greenredeem developed a launch marketing plan to ensure effective communication to all residents across a variety of media, both traditional and digital.

"Greenredeem are a fantastic partner to work with. They really came in with a plan, but are also looking to innovate as well - with new ideas, ways to keep things looking fresh, and ideas to ensure that people are both collecting their points and spending them." 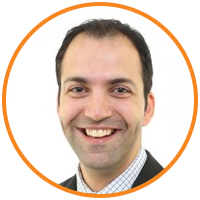 By cross referencing ACORN groups with the areas containing residents with the highest receptiveness to green statements, we could identify areas of the Borough where a greater volume of media would deliver a higher level of resident registration.

However, as the scheme was being launched to all residents in the Borough, this ensured that all the wards within the Borough were reached cost effectively. Examples of the media employed included: 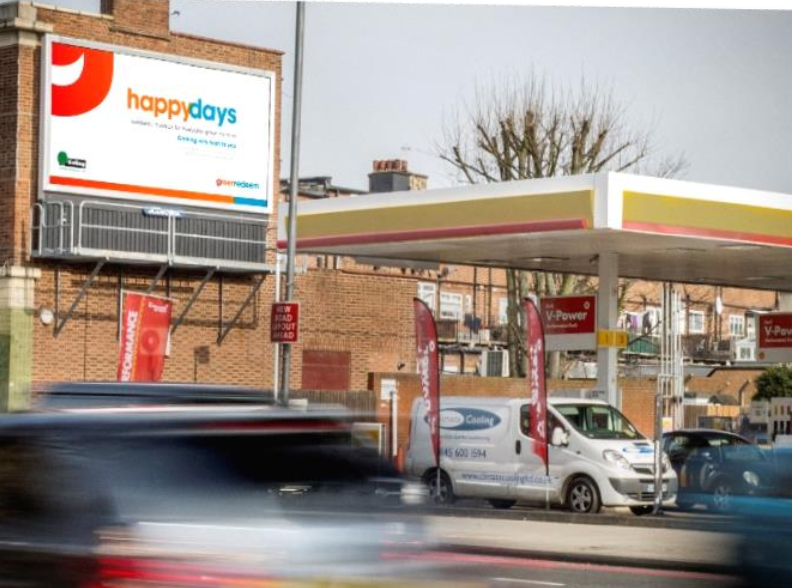 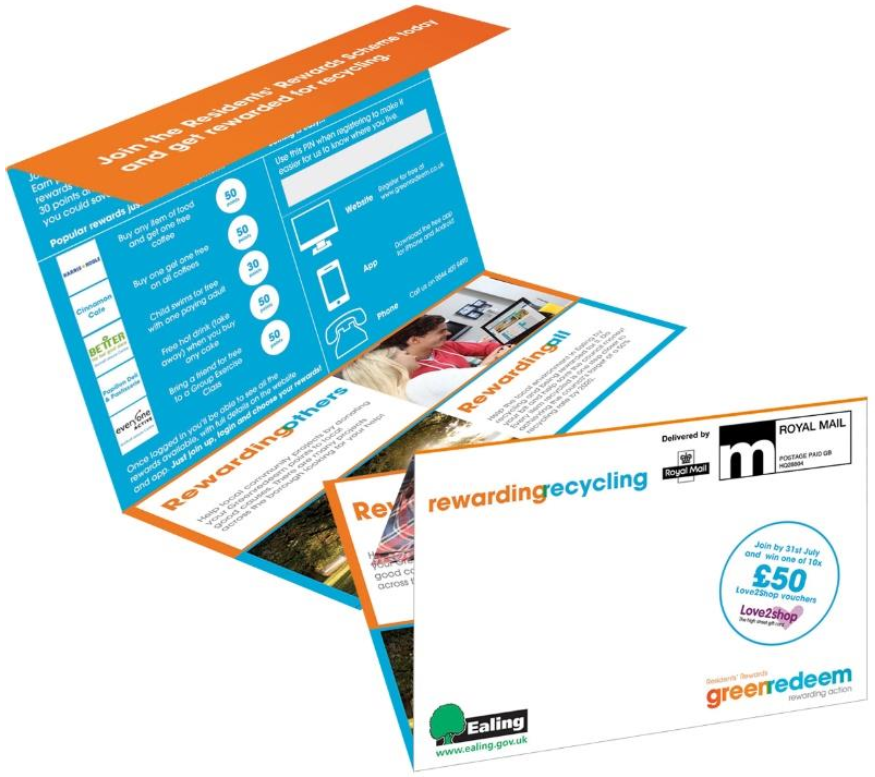 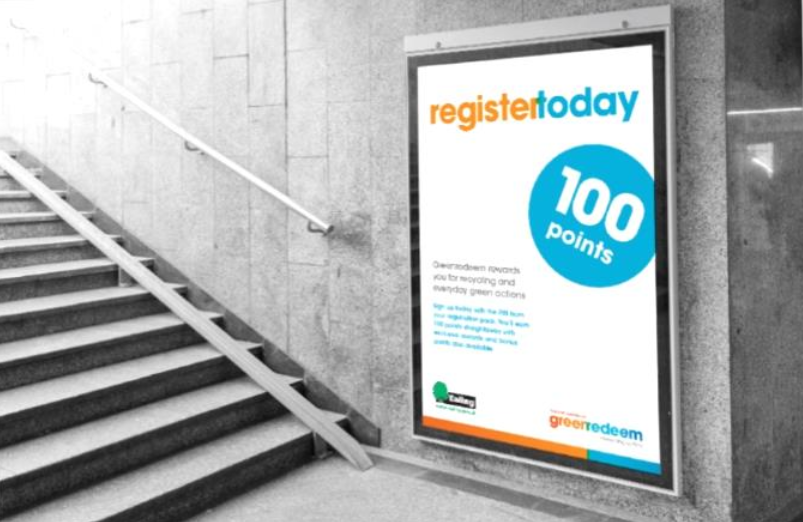 Utilising social media, we identified a series of local stakeholders with a significant social media presence that we could tap into to help announce the launch. The influencers came from a background in media, local business, politics, community groups and the wider public. By directly approaching them and gaining their support, we tapped into their wider social networks.
From insight gathered in the planning stage, we also established that there was a high level of digital access in the Borough. So, appreciating the role that digital media would play in engaging this audience, Google Ads, ATM advertising and Facebook ads were also employed.
Putting members just one click away from registering for the scheme was an important aspect of registering members. Utilising targeting tools in Facebook, we could identify an audience of highly relevant potential registrants and deliver them focused messages to encourage them to join up to the scheme. Targeted ads with different messages were delivered during the launch period:
Whilst utilising the ATM network in the Borough, a series of ads were delivered in the dwell time before cash being distributed to the customer. Each customer of those ATMs that took a receipt received a message on the ATM receipt with a points incentive to recycle the receipt that they had just received, as well as being reminded to ‘register today’. 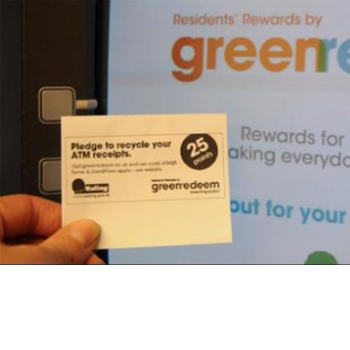 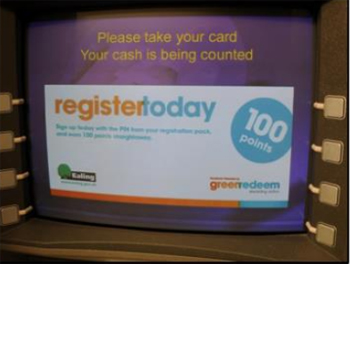 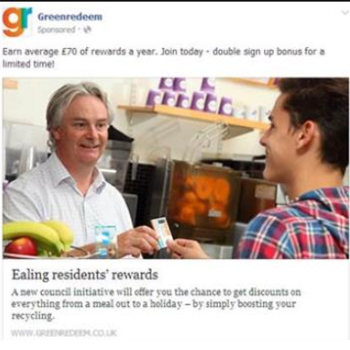 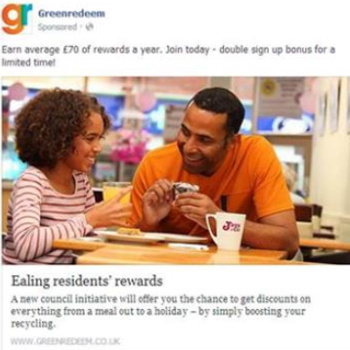 Working with the local community

A key lever to the success of the scheme in Ealing has been to work with the local community to provide motivation to the scheme’s members. From initially partnering with the Hanwell Carnival, through to providing a donations scheme for 13 local community groups to benefit through grants, the scheme has been a significant driver of behaviour change in the Borough. 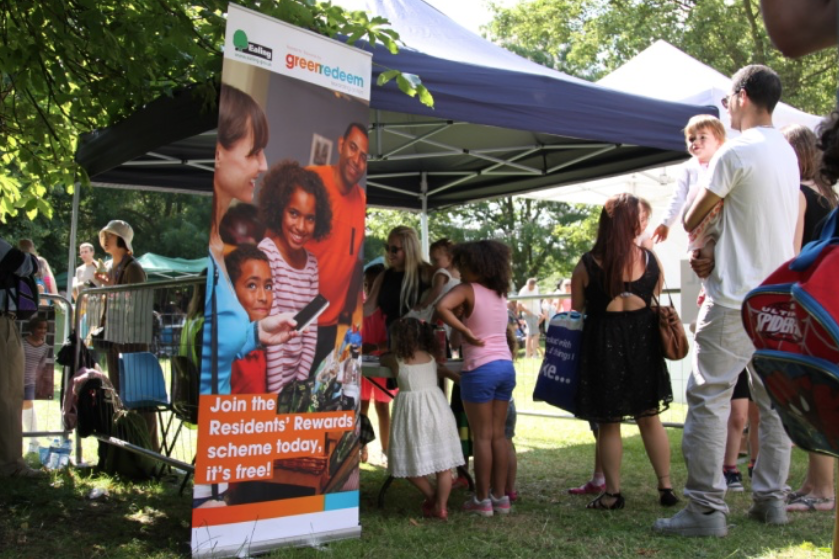 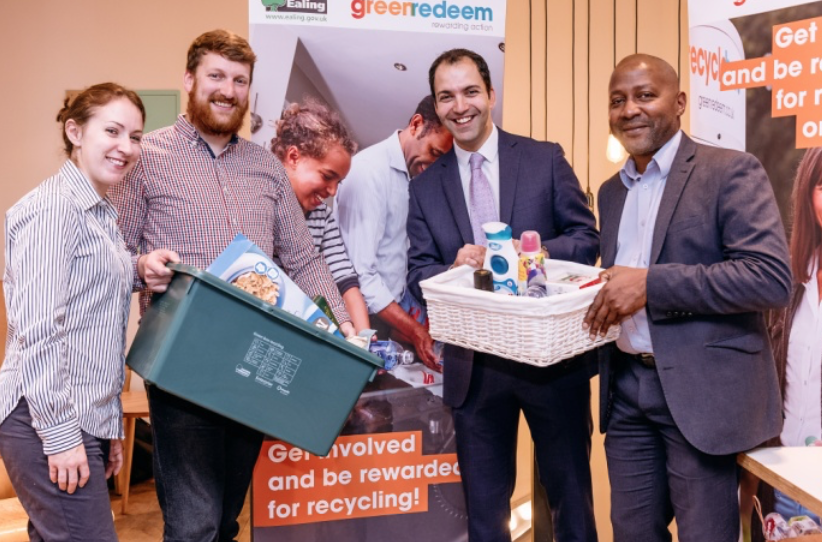 Greenredeem became headline sponsor of the Hanwell Carnival for 2 years in 2014 & 2015. The second largest carnival for attendance in London (behind the Notting Hill), the carnival provided a terrific platform from which to engage residents and encourage registration of the scheme.

By incentivising residents with free tickets into selected areas of the carnival, significant levels of registration were gained, whilst also providing help and support to members of the public about waste and recycling.

From the start of the partnership with Ealing council, all parties appreciated that offering members an option to donate their points, would be a key driver to motivating behaviour change.

The scheme was initially offered in partnership with the Community Volunteering Service (CVS), and then by associating with the Bubble project. The Bubble project is an Ealing Council initiative to bring together community stakeholders that are involved in charitable partnerships. The scheme has seen over 1.5m points donated by members during its lifetime, representing over 300T of recycling motivated.

Three years after it's launch, 24k households registered to the scheme and were communicated to weekly. This represented a population reach of 64k residents (based on the 2011 census).

Residents took an average 20,000 green activities per month relating to waste and recycling. There were 79 local rewards partners at the heart of the scheme with a direct link between actions taken and rewards received. The community donations scheme proved extremely popular with residents donating to 13 worthy local causes, providing real cash donations for their community.

Recycling results in Ealing have bucked both the regional and national trend. In 2016, the council reported an overall recycling rate of 50.7%, an increase of 10.2% during the three year period. With recycling rates in London declining by 1.9% during the partnership with Greenredeem, this improvement makes Ealing Council the 2nd highest collector of recycling by % in all London Boroughs.

The below graph highlights the immediate impact of the Greenredeem’s programme on dry recycling:. 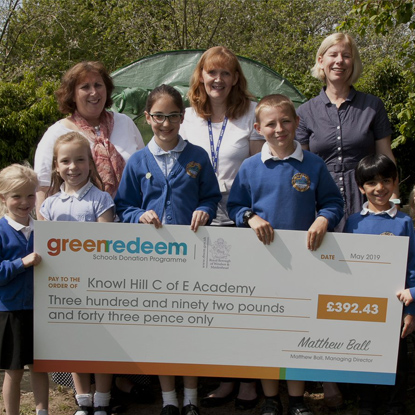 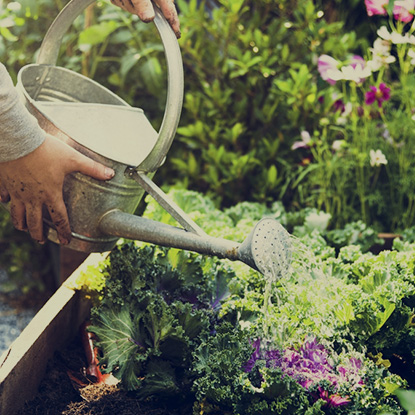 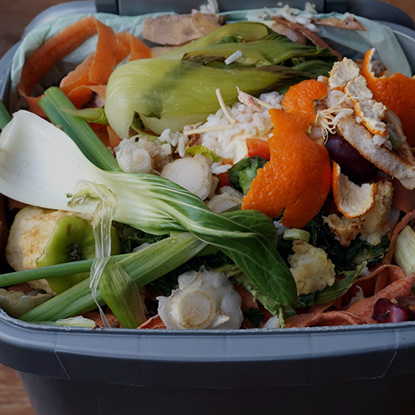 View case study
This website uses cookies to ensure you get the best experience on our website.learn more Got It