The UK's most magical steam railways

Standing on the platform marvelling at a fully operational steam engine is one of the great experiences that the UK has to offer. If you have young 'uns in your family, they'll go loco at the sight, sounds and smells of these epic machines. From dramatic views and engineering marvels to an elegant taste of the past, a trip on a heritage railway is guaranteed to be a truly memorable British day out.

Staffed in the main by enthusiastic and knowledgeable volunteers, nearly 150 heritage or preservation lines run services from spring through to late autumn, so if you're in need of a nostalgia fix, you're bound to find a line near you. That's not to say we don't have our favourites. We've picked out the three steam experiences we think are simply unmissable...

The Jacobite: "The greatest railway journey in the world"

Famous as the train used for the 'Hogwarts Express' in the Harry Potter films, the Jacobite steam train traverses a route from Fort William in the shadow of Ben Nevis, via Britain's most westerly train station Arisaig and across the stunning engineering feat that is the Glenfinnan Viaduct (pictured above).

How to get there via public transport: Mainline train to Fort William arriving the day before, or take the overnight sleeper service from London.

The two lines of the Ffestiniog and the Welsh Highland Railways make up the oldest narrow-gauge railway in the world. The three locomotives, now over 150-years-old and still operating with their original carriages, have been expertly and sympathetically restored, giving us a fascinating glimpse into the golden age of steam travel.

And if the breathtaking views over the mountains, rivers and ancient oak woodlands of Snowdonia weren't enough, peckish travellers can relish freshly cooked food served in first-class Pullman luxury as they wend their way through the Welsh countryside. What could be finer?

How to get there via public transport: Mainline train to Porthmadog or Blaenau Ffestiniog, or get the train to Bangor for the half-hour bus journey onwards to pick up the train at Caernarfon. 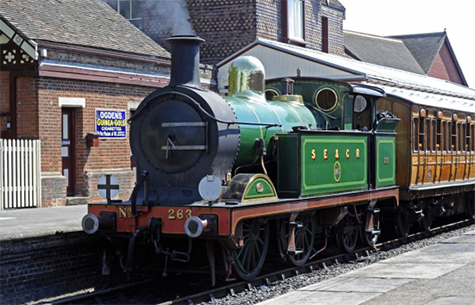 The Bluebell Railway: "Journey through the history of steam"

Running 10-miles across the border between East and West Sussex, the Bluebell Railway has the largest stock of steam locomotives outside of the Steam Museum. Ten of these beauties are lovingly kept in service by the army of volunteers who run the line.

What sets this heritage railway apart is the attention to period detail. Each of the four stations on the route has been refurbished to reflect a different period in the line's history, so within a short trip you can take in over 100 years of history, from Victorian times to the 1950s.

Be sure to leave an hour or two to visit the brilliantly presented museum and to have a go on the signals at Sheffield Park station!

How to get there via public transport: Mainline train to East Grinstead.

Do you love the nostalgia of steam? Which is your favourite heritage railway? Share your memories and comments with us here or via Twitter and Facebook!

>> Reasons to take a traincation

>> Are electric bikes the way of the future?

>> The UK's most spectacular cycle routes