Polystyrene gets a bad rap and probably deservedly: it's polluting to produce, bulky, virtually impossible to recycle without certain solvents and, incredibly, is predicted to take up to A MILLION YEARS to break down if it ends up in landfill or floating in our seas.

You may have noticed that here at Greenredeem we like to look on the bright side! Despite all polystyrene's shortcomings (we recommend avoiding it whenever you can), waste polystyrene can also be remarkably useful around the house... 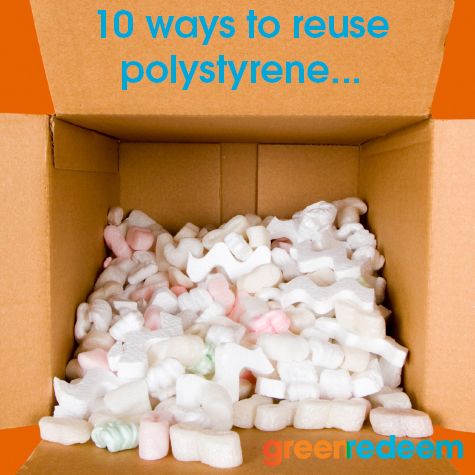 1. Use as drainage in the base of plant pots

While we wouldn't use it if we were growing edibles, just to be on the safe side, polystyrene is fine to use instead of pebbles, gravel or ceramic shards as drainage in plant pots. Line the base with a layer of smallish chunks and plant as usual.

This is great if you're going to be moving the plant regularly as it's a lot lighter than alternative drainage, but conversely take care that your plant doesn't end up top heavy. Some need a little ballast!

2. Create your own presentation mounts

Crafters are often on the hunt for cheap ways to display homemade goods. If you make badges, brooches, hat pins or anything with a sharp pointy end opposite the pretty end, polystyrene could be your newest find.

Look for good sized pieces from big box packaging. Turn one half downwards, so the intricate, concave moulded piece is underneath and the featureless 'boxward' side is uppermost. Glue a cheap fabric offcut over the top (try felt or velvet), tucking the cut edges neatly beneath and you've got a presentation mount.

3. Make your own superglue

Did you know that you can recycle polystyrene at home into a pretty serviceable household glue?

Mix a large amount of packing peanuts with orange rind oil, a.k.a. d-Limonene, and the solvent in the oil will slowly break down the polystyrene. Eventually you'll end up with a sticky substance that reportedly works well as a permanent glue.

*** Obviously, take as much care when handling your homemade superglue as you would when working with the bought stuff. Old clothes, gloves and facemask recommended! ***

4. Use as insulation (with caution)

Firstly, polystyrene is very flammable, unless treated with a special flame retardant, so please don't use waste polystyrene sheets as insulation for a room where someone sleeps or in the main part of a house.

Secondly, it's brilliant for covering up an otherwise frosty garage window during the winter, or as extra greenhouse insulation. We've even discovered some dedicated reusers using waste polystyrene to replace part of the roof on an external bathroom!

Polystyrene bits and bobs are very useful for cushioning delicate items in a house move or for sending breakables through the post. Larger moulded sections can even be 'carved' with a craft knife to fit the required shape.

6. Use as raised beds for a patio

Large, deep, moulded polystyrene pieces, from big box appliances or coolers at fish markets for example, make excellent DIY raised beds for the garden. They may come with 'drainage holes' as part of the manufacturing process, but if not carefully use a craft knife to make your own.

Not the most elegant garden reuse we've ever seen, but filled with a heavenly mix of bee-friendly wildflowers or more traditional bedding plants they look a treat!

7. Get junk modelling with the smaller members of your family

Have you ever noticed how some moulded polystyrene pieces look like model buildings? Glue on a few paper details and the kids can have a whole toy city to play 'Godzilla' with or race cars around.

>> Reuse ideas for learning at home

Polystyrene plates that have been used at parties often just get chucked, but washed they're so useful for crafting. Try making some weatherproof bunting by cutting the bases of rescued polystyrene plates into small triangles and threading onto some garden twine.

9. Use thicker polystyrene to make a Perlite substitute

Perlite ensures better drainage and aeration for container grown plants and is also used for starting seedlings in a soil or soilless medium, but it can get expensive! Waste polystyrene is a practically free substitute that works almost as well.

For this you'll need the tougher kind of polystyrene, such as the meat trays from certain old fashioned butchers. Thoroughly clean and cut them into rough 2cm squares with sharp scissors. Bung them into a blender with enough added water to float the squares near the top, and whizz them for around a minute. Draining will give you a Perlite substitute with a similar consistency to coarse sand.

Cut small shapes from thin polystyrene trays to use as non-snagging knitting markers. Why not try these with some of our easy eco-friendly knitting project ideas?

Do you think manufacturers should stop using polystyrene? What are your favourite tips for reusing it? Share your thoughts with us here or on Twitter and Facebook! 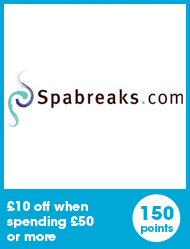