Heart-warming animal stories to inspire us

We love a story with a happy ending! More so when it involved animals! And so we've spent a few emotional hours scanning through good news from the last few months to bring you our very best inspirational stories of interspecies caring.

Is it dusty in here or is it me?

Bird man raises a tiny wren from an abandoned egg

If you're a fan of our feathered friends, you'll adore this Dutch bird fancier's YouTube channel introducing Albert, the one-in-a-million quail hatched from a supermarket egg.

Albert isn't the star of this particular show, however – instead we see our human hero rescuing two eggs from a fallen nest, each no larger than the tip of a finger. One egg proves to be infertile, but within the other... life! The lesson from the story? Raising a wren is seriously hard work, but the pay off is worth it!

Inspiration: Why not put out food for our garden birds during the colder months?

Shortly before Romy McCloskey's mother died, she promised her daughter that her spirit would visit her in the form of butterflies. In her honour, Romy vowed to protect the endangered Monarch butterflies native to her Texas home and started collecting the caterpillars, keeping them safe from predators until the butterflies pupate.

Getting oneself out of a chrysalis isn't always easy and sometimes delicate butterfly wings became enmeshed and tear during the process. Romy initially thought she was going to have to euthanise the poor lopsided creature in the picture above, as it was unable to fly. But then Romy realised that her day job as a highly skilled embroiderer and costume designer could make the difference between life and death.

Inspiration: Could you open a bug hotel in your garden this year?

Man trains cat to bring in leaves instead of live gifts

When Ben started waking up to frantic birds and mice on his bed each morning, he decided that Baloo the cat would have to be trained to drag in less traumatised gifts. After a rigorous daily programme of yelling and freeing her offerings from the window, the confused feline finally realised that he'd prefer something vegetarian.

Now they play with a leaf together every morning. 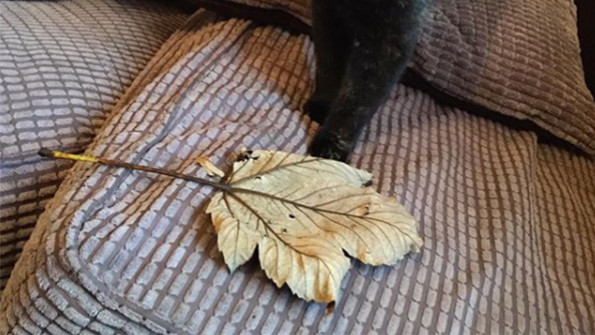 Inspiration: Can you help make sure your cat doesn't injure or kill wildlife? Make sure they're well-fed, play with them each day to tire out the hunting instinct and put them in a quick-release collar with a bell. Keep cats in at sunrise and sunset between late spring and mid-summer when birds are breeding.

Humans don't have a monopoly on compassion or ingenuity when it comes to saving other species, and this video proves it!

A curious orangutan spots a baby moorhen close to drowning in a zoo pond, barely moving in the water due to an injury. The ape pulls off an incredible rescue, captured on video by visiting tourists.

The chick looks to be at death's door at the end of this film, but don't worry, it's another happy ending! Zoo staff whisked the chick to the vets who were able to nurse the bird back to health.

Inspiration: If you have a pond or other water feature in your garden, make sure there's an escape ramp for any unwary wildlife that might fall in.

>> These eco-friendly robots are gearing up to save the planet