The myths dispelled! What actually happens to our recycling...

At Greenredeem, we love recycling. Absolutely head over heels for it. We think it's the bee's knees, the dog's bits and all the things in between. The reason? We think the developing 'circular economy' - where all products end up in a closed loop of material reuse - will play a huge part in getting us to a greener, cleaner and truly sustainable future for everyone.

Unfortunately, not everyone's such a big fan of recycling. If you've ever heard people saying things like, "None of that really gets recycled - everything just gets thrown in the same bin lorry", "Well, of course, all the recycling collected by our council just ends up on rubbish tips in China", "Household recycling doesn't really make a difference to the environment - it's just a waste of our time" and "Recycling is actually a drain on the world's resources", then you'll know what we mean. It's a great shame, as these harmful myths both put people off who might otherwise start to recycle and demoralise those who already are recycling.

Recyclers, we salute you! Keep up the good work and don't let mistaken criticism get you down. Let's do some myth-busting with a quick look at the so-called 'truths' about recycling and see how the facts have been jumbled...

Myth #1: I've seen the bin man throw my recycling onto the same lorry as my rubbish, so the recycling must just end up going to the same place: landfill or the incinerator. BUSTED!

These days, councils have to be very savvy about how they spend hard-earned taxpayer's money and a clever way to do this is to double up on waste collections. Newer style waste trucks (or bin lorries, as we always used to call them!) can collect general waste in one side, recycling in the other; with the two carefully separated at the end of the day when the trucks are tipped.

Myth #2: If I live in an area where I don't have to sort my recycling into separate materials, then it all just ends up chucked in with the rubbish. BUSTED!

If you're lucky to live in a council where your recycling materials are collected all together, then there's some really clever tech at the recycling processing plant that splits out the different materials automatically.  You can rest assured that all your clean glass, can, paper and cardboard recycling goes on to have a second useful life.

This brilliant short animation shows how it's done! Very clever...

Myth #3: The materials we sort for recycling just end up bunged in landfill in China. BUSTED!

It's fairly easy to see how this myth came about. Yes, it's true that a certain proportion of our recycling ends up overseas - however the reason for this is that foreign companies actually BUY our waste products in order to recycle them into new products.

Countries such as China, with their huge manufacturing industries and lack of virgin material sources (no native forests or oil supplies), are prepared to pay high prices for our waste plastic and other recyclables.

Why does this work out as a positive for the environment?

>> Using recycled plastic in manufacturing cuts down on the need for virgin sources of plastic, helping to preserve remaining natural resources.

>> Transport emissions are relatively low, as the recyclables are packed in container ships returning to the Far East after bringing goods to the UK.

>> These useful recyclables DO NOT end up in landfill! Why would companies pay many thousands of pounds for our waste plastic and transport it halfway round the world simply to chuck it into holes in the ground?

To try to illustrate this incredible weight, the 95-storey Shard skyscraper weighs a total of 12,500 metric tonnes. So each year, our household recycling is saving the equivalent weight in useful materials of 800 Shards from landfill and incineration! Not making a difference? I don't think so! 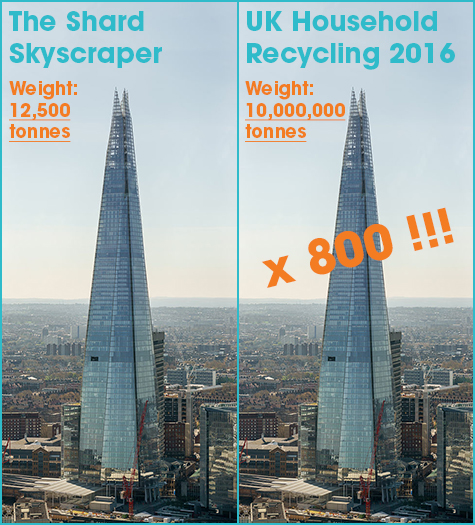 Myth #5: Recycling is a drain on the world's resources. BUSTED!

Back in the late nineties, a controversial school of thought bubbled up in the States amongst journalists looking to make a splash with their columns: the idea that recycling was a waste of public money with few eco-benefits, actually causing greater pollution due to energy usage as well as hitting taxpayers in the pocket. Back then, environment organisations quickly disputed and disproved these allegations - yet, unfortunately, this myth still lingers on.

All the facts point to recycling being cheaper and far less polluting than any alternatives, and becoming increasingly so as the competition for the remaining fossil fuel resources heats up... Additionally existing landfill sites are filling up, so fees for 'dumping' space grow less and less cost effective. As we said when busting myth number two, companies are already prepared to pay premiums for recyclables and transport them around the world - why would they do that if it didn't improve their bottom line?

>> How do you solve a problem like 40m waste tyres a year?

>> Charities raising money from recycling - and how you can help!

>> How your recycling is actually saving lives